On Whale Carcasses and Bible Stories 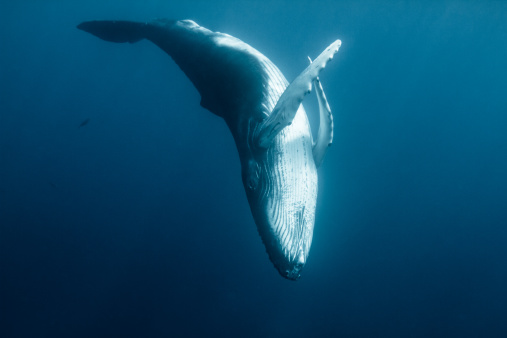 After hearing Vancouver-based theatre artist, Tetsuro Shigematsu, describe what happens to a  whale after it dies, a thought came to me: maybe Bible stories are to spiritual ecology what whale carcasses are to marine ecology.

Shigematsu’s description of the epic demise of the world’s largest mammal is as much poetry as it is science:  The life of a whale is unfathomable (his voice mesmerizing) but equally extraordinary is its death.

At first the decomposing gases cause the body to float to the surface where the sunlight accelerates the decomposition process. Eventually the skin, the layers of blubber,  break open, gases are released. And then it begins its slow journey downwards; its final swim to the bottom of the sea. And when it lands, this is where things really begin.

Those trillions of calories are a bonanza for all kinds of life. A universe in which countless generations of species will live and die. It’s ribcage is the edge of the known universe. Consider the whale’s eyeball alone which, to plankton, would be as vast as the moon. The optic nerve, as mysterious a passageway as a cosmic wormhole. And the brain itself, all the neuro pathways, all the dissolving synaptic passages, all those tiny creatures thoughtlessly consuming once precious memories of love and loss, of dreams, of song cycles, of the sacred.

So here’s the question: what would change if we thought of the Bible less as a worldview that needs defending on moral or theological grounds, and more as a collection of stories endlessly giving themselves away?  Afterall, the image of life feeding off of life is a profoundly mythic and spiritual one. It takes giving one’s body away, as it were, for life to be reborn.

For a child, decaying stories will not do, of course. A story needs to be well-formed and clear, in the prime of its life, so to speak, with the narrative arc fully intact. When it comes to storytelling children settle for nothing less than a story with a proper beginning, middle, and end.

However, could it be that overtime the life of a story ebbs away and that at some inevitable point it’s death is not only inevitable but necessary, even important? Maybe in the decay process listeners will take take refuge in single sections – the Psalms, the Gospels, the creation narratives – feasting for lingering periods, until eventually, they too are gone.

Once we’ve feasted on a story long enough perhaps it takes up residence in us at a cellular level. Perhaps we can be relieved of the need to wring more from it, the need to prop it up as the robust narrative it once was. Maybe as we mature in the faith all that is left of the stories that once plied the mighty seas of our life are the bones –  and even they, with time, will dissolve into the sediment of the ocean floor.

I’ve mentioned before how I love bumping into story guild alumni. What I see when I look at these young adults who came up through the ranks, are the dozens of ways they inhabited sacred stories through dramatic play for whole seasons of their lives. And whether they attend church or not, whether they have the right doctrine or not, is of no consequence to me. What matters is that the stories reside deep in their DNA and will be there for them when life comes calling (as it will).

I grew up with a version of the scripture called “The Living Bible”. I was a devout kid and used to carry that Bible around in the crook of my arm. But as Christendom crumbles and the stories of the faith are lost to the public imagination, it occurs to me that perhaps that’s okay. Perhaps there is something to gain from allowing this most beloved of books to be called by another name: “The Decomposing Bible.” And maybe that doesn’t need to be as scary as it sounds. Maybe in their dying, the stories of an ancient faith, like the body of a composting whale, have nourishment to offer universes yet to be born.