The End of Sunday School 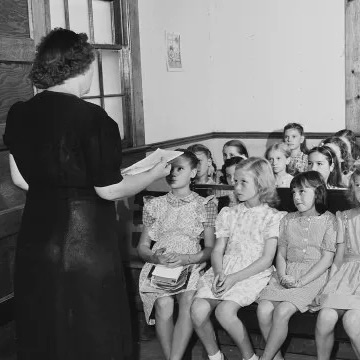 It’s a strange feeling to be in a profession that is slowly collapsing. As a religious educator I have been hired by churches across the denominational spectrum to work with an institution that is now running on fumes: Sunday School.

It makes for a daily exercise in humility when the initiative I have built my career around is used in popular culture as a synonym for something bland and boring. “A Sunday School answer” suggests a response that is either rote, naive, ill-informed or just silly. “Sunday School morals” implies a set of values that are out-of-touch, old-fashioned, inexperienced, even repressed. The expression “You won’t learn this in Sunday school!” condescends. It implies that the thing being spoken of is edgy, daring, exciting, controversial in contrast to the simplistic, one-dimensional, predictable, and uninspired Sunday School.

Satirizing one’s Sunday School experience has become its own sub-genre of pop literature complete with caricatured teachers and deplorable theology.
“On the drive to church for the first time, I sat in the back seat, excited and nervous for this new experience,” reads one post on the 28,0000 followers Facebook group, Raising Children UnFundamentalist:
My parents brought me to a bright-colored room with other four-year-olds and a teacher who was the largest woman I’d ever seen. She was white and she was in charge. My parents left and the moment was more data for my abandonment issues later.
“Sin makes your heart black,” the giant explained. She wore a baby blue, floral-patterned dress and coke-bottle glasses, her light brown hair slightly matted against her damp, pale skin.
“Have you ever lied? Have you ever stolen? Have you ever been mean? Then you’ve sinned. Sin separates you from God. He hates sin. He can’t look at it. Someone had to come along to satisfy His wrath. So He sent His son who lived a perfect life, with no sin, to die for us. He was crucified. They took a long spike and nailed his hands and feet to a wooden cross,” she explained gravely.
Horror. She was telling us a horror story.“

Dumping on Sunday School is low-hanging fruit in the culture wars, easy points for those wanting to distance themselves from institutional religion. After all Sunday School, being Sunday School, is unlikely to defend itself.

The press is bad. Yet, all is not lost. If there is one thing Sunday school has done well in its brief 250-year history, it’s pivot.

It got its start as a movement for social reform in mid-18th century England, a time when the children of factory workers and farm labourers received no formal education and typically worked alongside their parents six days a week sometimes for more than 13 hours a day. In response to the poverty and associated rise in juvenile crime in his community, a newspaper editor by the name of Robert Raikes opened the doors to his home on Sundays and used his Bible to teach children living in the Gloucester slums to read and write. Other households and churches followed suit.

A hundred years later, the Education Act of 1870 rendered Sunday School’s basic literacy mandate redundant. The movement regrouped to fill another need in the social fabric becoming a place for young people to gather. Sunday Schools on both sides of the Atlantic, became known across denominations for hosting picnics, sporting teams, debate and drama clubs. Facilities were built and staff hired to support the influx.

Then, in the post-war era extra curricular activities were increasingly secularized and monetized. Municipal governments took up the community-convenor mantle and registration for Sunday school clubs and social groups dwindled. Staff were laid off and buildings abandoned.

Instead it scaled back to the one remaining mandate that had never been far from its core: the teaching of Bible stories to children and youth. Sunday Schools moved into church basements where most can be found today, sustained by church volunteers and meagre church budgets. The sale in pre-packaged, ready-to-use Sunday School curriculum is a multi-million dollar industry in the USA today.

Still, bigger storm clouds were brewing on the proverbial horizon. In the closing decades of the 20th century interest in organized religion began to plummet. The decline began a trend with no end in sight. Unable to pay their bills, churches of all denominational stripes started closing their doors. The demise of Sunday School, dependent as it is on the health and well-being of the institutional church, seems imminent.

So, as the end nears, my work can feel ridiculous. It’s tempting to count my losses and run. Indeed, I tried that once. After twenty years telling Bible stories to kids in a local Baptist Church I resigned my post and took up milking cows on a dairy farm. I was away for three years. But I’m back. Why?

Because I believe kids, maybe now more than ever, need stories to navigate by. And not just any stories, but the big ones, the mythic ones, the sacred ones (call them what you will), – unwieldy, gritty, raw, demanding – the stories that take the human predicament seriously, that call us back from our hubris, that place us on the path of transformative living where forgiveness, imagination, community, sacrifice, divestment, celebration and gratitude are not just lofty ideals but a roadmap into an uncertain future.

Martin Shaw, the great mythologist (and recent convert to Christianity) suggests that we reframe “living with uncertainty” to “navigating mystery”:

The old stories say, enough; that one day we have to walk our questions, our yearnings, our longings. We have to set out into those mysteries, even with the uncertainty. Especially with the uncertainty. Make it magnificent. We take the adventure. Not naively but knowing this is what a grown-up does. We embark. Let your children see you do it. Set sail, take the wing, commit to the stomp. Evoke a playful boldness that makes even angels swoon. There’s likely something tremendous waiting. (Eminence Magazine, Navigating the Mysteries, May 2022)

So I walk with a wide and open heart toward my own vocational demise. Why? Because if there is one thing I know for certain it is that endings are often only beginnings in disguise. That what appears to be an endless night may in fact be the predawn hour.

Oh, by the way, that I learned in Sunday School.