Yes, We Do Bible Stories 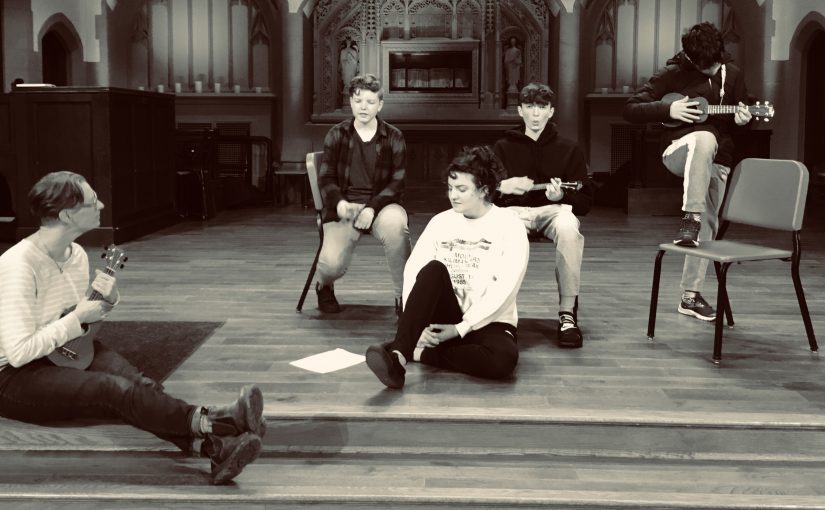 When asked in casual conversation about the work of Sacred Canopy I tend to take the low road and respond simply: “It’s a theatre initiative.”  So far so good. Inquirers are usually impressed. Their eyes light up.  “Theatre. Wow. Cool”  They want to know more.  It’s then that the ice gets a little thin.  “We do Bible stories”, I say, “….with kids”. Response?  A look of incredulity followed by a change in the subject.

I don’t blame them. Anyone remotely connected to church culture knows what “Bible stories with kids” means. Its means events like the annually-staged Sunday School Christmas pageant where 5 year-olds are dressed up in oversized bathrobes with towels draped over their heads trying to remember lines with words like “Hark!” and “Behold” in them. Painful for everyone except the adoring parents of the little tikes involved.

So the thought of developing a whole theatre initiative around such pageantry is perplexing. To be fair, people like the idea of Sacred Canopy but think we should drop our commitment to stories from the Bible and broaden out into stories that are more in-touch with the “sacred stories” of our time –  “What you guys do is amazing but why not tell the story of Nelson Mandela or Malala?” I’m often asked.  “These would have broader appeal to the public imagination…”  So the argument goes.

I get their point.  And, to be sure, it’s tempting.

However our question at Sacred Canopy is not whether to stick with biblical narrative or not.  Rather our question is how to spring Bible Stories free from cultural mismanagement to which they have been subjected.  Mismanagement culprits include kitschy Christian publishers which have mass marketed biblical narrative to a preschool-aged audience  (e.g. The ubiquitous Noah’s Ark wallpaper motif).  Then there is the Hollywood portrayal of biblical prophets as robed grey-beards with boney fingers carrying out the will of God (Classic case-in-point: Charleton Heston in the 1956 film The Ten Commandments) .

Yet it’s not just the marketing wiles of pop culture that have Bible stories entrapped. They have been equally co-opted by the very community they seek to serve. In the high church traditions biblical narrative gets buried beneath the weight of the prevailing liturgy while in the low-church traditions the same passages can too quickly be reduced to morality tales or fodder for insights from pop-psychology.

And all of this to say nothing of the political agendas of church and state alike which have used biblical narrative to extend boundaries, oppress “the other”, justify exclusion and so forth.

The bottom line is that Bible Stories are so laden with imposed agendas that they come through the wringer pretty much flattened in the public imagination.  All that’s left are spoofs and caricatures. Mention an Old Testament character or story outside of a religious context and they evoke a guffaw. Everyone knows it.  Bible stories are out-dated with their social exclusions and out-of-touch pronouncements.

No wonder we garner blank looks and arched eyebrows when we mention the subject matter of our theatre initiative.  Needless-to-say, one of our goals through our Sacred Canopy storytelling approach is to move as far away from these culturally prescribed stereotypes and assumptions as possible. We hope that through art and dance, mythic storytelling, music and imagination, community and intergenerational collaboration to recover something of what we understand biblical narrative to be, namely a collection of ancient, time-honoured stories,  told, gathered, layered, recorded, organized and re-organized by a people in search of the ultimate human quest: a coherent universe. Stories unabashedly in touch with what it means to be human and not ashamed to include experiences of vengeance, lust, greed, passion, hope, betrayal, forgiveness and love. Stories that range in literary quality from unimaginably lyrical to the tiresomely didactic. Stories that insist on a relationally-oriented Divine Presence who – whether distant, intimate, angry, persistent, wooing or pedantic – is always and ever a sub-text of the prevailing narrative. In short, stories with the potential to take the heart and spirit of the listener on a spiritual journey of transformation, even by 21st century standards.